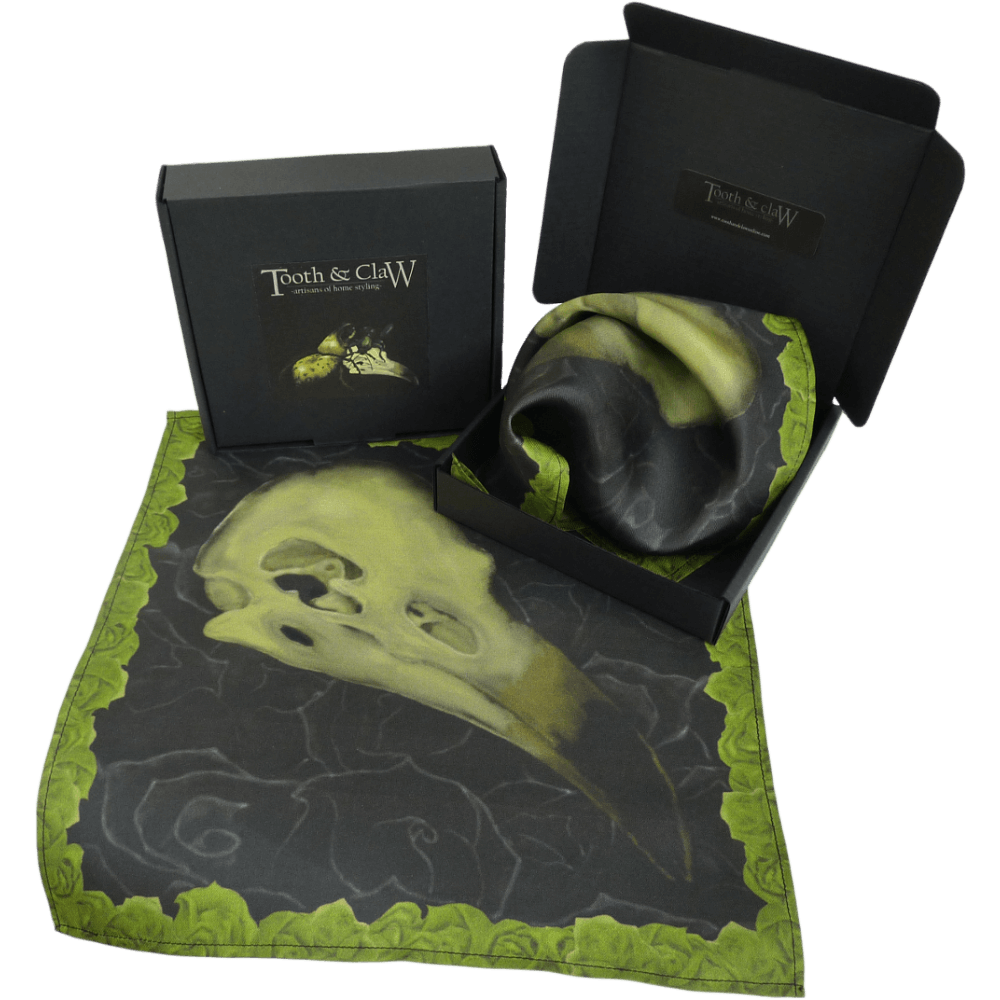 Our ‘Alas Poor Birdy’ Pocket Square (above) was recently featured in Texas based magazine ‘Paper City’.

They published a few quotes from me but i thought that it would be worth publishing the full interview.

Paper City: I was intrigued that imagery relating to taxidermy and wild animals entrapped or in conflict was shown by a number of the British exhibitors, but hardly at all by the Americans. Do you think there’s something in British cultural history that accounts for the appeal of this imagery?

JJ: I think that the appeal of this imagery for British people most likely comes from the recent Taxidermy trend that occurred here. Much of the vintage taxidermy that is available is from the Victorian period and they often depicted animals in poses similar to those that you describe.

Paper City: What about the history of cabinets of curiosity, collecting of exotic natural specimens and taxidermy, and their use in interior decoration?

JJ: In the UK using these kind of objects in the home has had a real resurgence in recent years. Skulls, Antlers, antique anatomical art and objects have all become much more widely used in homes in the UK and it is quite common to see this kind of item in Interiors Editorial pieces.

For us it is actually a bit of a difficult issue, we like the aesthetic but as we have both been vegetarian for many years we struggle to reconcile this with our taste. We see what we do as an ethical take on the taxidermy trend. We understand why people like it but on a personal level we would not buy any taxidermy pieces for ourselves.

Paper City: Is there in the UK a particular historic (or contemporary) designer who uses this kind of imagery, or specific house where it was used in the interior decor, that has been an inspiration to you?

We are also big fans of Horror movies and for us at least that combination of influences is where this aesthetic comes from.
With regard to designers who have inspired us – we feel as much of an affinity with the fashion idustry as we do with the Interiors industry. We are both huge fans of the jewelry designer, Shaun Leane and he is definitely one of the designers who has helped to popularise this aesthetic. He worked a lot with fashion designer Alexander McQueen who again has used similar imagery in several collections.
Andrea also worked for the designer Vivienne Westwood which links back to the Punk thing. Westwood’s early work with Malcolm McClaren (Manager of the Sex Pistols) featured clothing adorned with chicken bones and this has all filtered through into what we do now.

Paper City: Do you know of other contemporary designers, perhaps working in other media than you do, who also bring in such imagery?

Paper City: The skulls on “Come to Dust” are of what kind of bird?

I wanted to do the same thing with a bird skull and create an image that was simplified and captured the essence of a bird skull.

Paper City: Is there anything else you can say about the forthcoming “Destroy” line?

JJ: It links back to Vivienne Westood and Malcolm McClaren. One of their most famous and controversial early works was a T Shirt emblazoned with the word ‘Destroy’ and featuring imagery that represented ideologies that they wished to smash, question and see destroyed.

‘Destroy’ is also the last word of the Sex Pistols song ‘Anarchy in The U.K’.

Similar to that song we want the collection to shake our industry up a little. The creative industries in the U.K have a tendency to get stuck in trends.

We feel that things are too focused on the whimsical in our industry at the moment ( and have been for quite some time) so this collection is a challenge to other designers that asks ‘What are you doing? Are you painting pretty pictures or are you a designer?’

Paper City: Is this imagery available on products other than pillows?

JJ: The bird Skull image is available on a Men’s silk pocket square. We also occasionally use the imagery, laser etched on to wooden serving boards. ‘Destroy’ will be available as wallpaper, pillows and possibly a gift range.